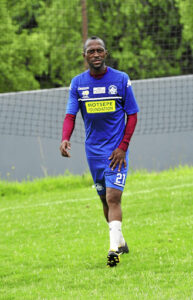 He made his debut in a COSAFA Cup match against Seychelles on 26 February 2005 and was part of Bafana Bafana’s 2008 African Nations Cup squad and the 2013 Africa Cup of Nations squad.

He was called back after a year by Gordon Igesund for CHAN 2014 hosted in South Africa, and he played a full match in the final group stage against Nigeria in 3–1 defeat. That was his final game for Bafana; he was personally criticized, alongside with Moeneeb Josephs, for a loss against Nigeria by Minister of Sport and Recreation Fikile Mbalula, who said that the team was “useless” and “a bunch of losers”.