She is also known as Xolisilem and has been making rounds on social media with everyone talking about her and what she does for a living. 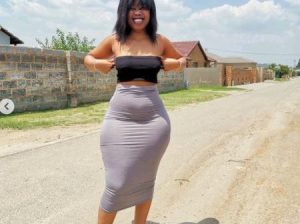 Xoli Mfeka is a bold lady who has just begun on a trip that most people would rather avoid. She took the jump and decided to pursue a career as an adult film actress, and it appears that she is reaping the benefits of her decision.

Xoli used to be a fitness bunny, and in that mist, she would offer herbal life to men and women who wanted to join the fitness trip.

She recently appeared on MacG’s podcast and bared her soul, and it appears that this has resulted in her gaining a large number of followers and people flocking to her only fans account to subscribe.

This has clearly made her a lot of money, as she already earns around R80,000 every month.

She has an estimated net worth of $200,000 which she has earned as an adult film content creator.