There is no sport like football, it is the most popular sport in the world. The passion, the fans, the stadium, the history, the players, makes it unique to all. In short, it is second to none.

Speaking about players, there are some whose great achievements makes it impossible for their names to be erased from the hearts of football fans, and the history of the game. In no particular order, we review some of the greatest players in the history of South African football. 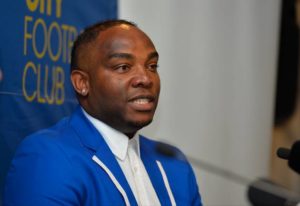 It will be very difficult to for this man’s name to fade out of history. Benni McCarthy is a proven goal scorer both in his club side and countryside. He scored a terrific 192 goals in 480 appearances in club and countryside.  Born on the 12th of November 1977, Benni is the leading goal scorer in the history of South African football with 31 goals.

He is the only South African who has won a champions league trophy. During his career, he played for different clubs including Seven Stars, Ajax, Celta Vigo, Porto, Blackburn Rovers, West Ham United, and Orlando Pirates. He was the manager of Cape Town city from 2017-2019.

Born on the 18th of December 1965, the attacking midfielder record in front of goal looks very impressive. Moshoeu scored an impressive 160 goals in 628 appearances (both club and country), and he was part of South Africa’s team that won the 1996 African cup of Nations.

Shoes as he was popularly known amongst fans, played for teams like Giant Blackpool, Kaizer Chiefs, Gençlerbirligi, Kocaelispor, Fenerbahçe, Bursaspor, AmaZulu. After his playing days, he became the head coach of Alexandra united in 2010.

Currently the Owner and Coach of Jomo Cosmos, Jomo started his career at Orlando Pirates. He stopped professional football in 1982, and since then he has been coaching. He has managed the South African team three times, though he was the Caretaker Manager.

During his time as a footballer, he played for Orlando Pirates, New York Cosmos, Colorado Caribous, Atlanta Chiefs, and Toronto Blizzard. Somo was voted 49th in the Top 100 Great South Africans in 2004.

After his spell at Kaizer Chiefs, Radebe moved to Leeds United where he eventually became the captain. Radebe was a member of the South African team that won the African Nations Cup in 1996.

Mark Fish was also a member of South Africa’s team that won the 1996 African Nations Cup. Born on 14 March 1974, the center back started his career at Arcadia Shepherds.

He made a total of 448 appearances for both club and country. Mark Fish scored 23 goals in his career and played for teams like Jomo Cosmos, Orlando Pirates, Lazio, Bolton Wanderers, Charlton Athletic, and Ipswich.

Also known as 16 valve, the midfielder started his career at Moroka swallows, before moving to the youth setup of Kaizer Chiefs. In 1987, Khumalo became part of the Kaizer senior team. He made a total of 494 appearances for both club and country where he scored a total of 90 goals.

He is currently the technical director of Baroka F.C. Khumalo was also a leading member of the winning South African national team at the 1996 African Nations Cup.

Steven Pienaar has represented his country in the U-17 set up and the senior team. He started his youth career at West Ham Westbury and later ended up at Ajax Cape Town.

He started his Senior Career at Ajax Cape Town and went on to play for clubs like Ajax, Borussia Dortmund, Everton, Tottenham Hotspur, Everton, Sunderland, and Bidvest Wits. He made a total of 423 appearances, and he scored 44 goals.

The forward is the highest all-time goal scorer in the PSL. He started his youth career at Sabatha FC, and in 1977 he moved to African Wanderers where he started his international career.

He later went on to play for teams like African Wanderers, Kaizer Chiefs, Udinese, Salemitana, Empoli and ended his career at AmaZulu where he made 70 appearances and scored 28 goals.

Shaun Bartlett is the current assistant manager at Kaizer Chiefs and he is popular for the goal he scored during his time at Charlton Athletic. He represented South Africa in three African Cup of Nations (1996, 2000 and 2002) and was the top scorer in the 2000 edition with five goals.

African players who are in Europe: Mahrez nets in City goal...