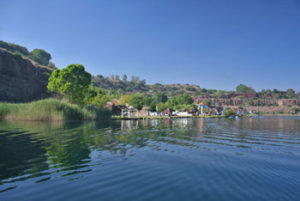 None of the country’s rivers is commercially navigable and most river mouths are unsuitable as harbours because large sandbanks block entry for most of the year.

The Orange River is South Africa’s largest river. Rising in the Drakensberg Mountains, it traverses through the Lesotho Highlands and joins the Caledon River between the Eastern Cape and the Free State before it empties into the Atlantic Ocean, it forms the border with Namibia.

Relief features
South Africa’s surface area falls into two major physiographic categories: the interior plateau, and the land between the plateau and the coast.

Forming the boundary between these two areas is the Great Escarpment, the most prominent and continuous relief feature of the country. Its height above sea level varies from about 1 500 m in the dolerite-capped Roggeveld scarp in the south-west to a height of 3 482 m in the KwaZulu-Natal Drakensberg.

Inland from the escarpment lies the interior plateau, which is the southern continuation of the great African plateau stretching north to the Sahara Desert. The plateau is characterised by wide plains with an average height of 1 200 m above sea level. The dissected Lesotho plateau, which is more than 3 000 m above sea level, is the most prominent.

Between the Great Escarpment and the coast lies an area which varies in width from 80 km to 240 km in the east and south, and 60 km to 80 km in the west. At least three major subdivisions are recognised: the eastern plateau slopes, the Cape folded belt and adjacent regions and the western plateau slopes.