Ashleigh Buhai (born 11 May 1989 in Johannesburg) is a South African professional golfer. 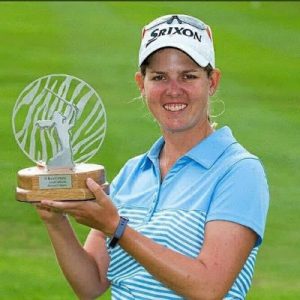 After marrying her husband, David, in December 2016, Ashleigh changed her name to Ashleigh Buhai.

Buhai was the first player in 101 years to win the Ladies South African Open three times and the youngest player to win the ladies’ South African Amateur Stroke Play and Match Play double. While still an amateur, she represented her country in the primarily professional Women’s World Cup of Golf three times.

Buhai began her professional career the day after she turned eighteen. Her third professional event was the 2007 Catalonia Ladies Masters, which she won. She became the Ladies European Tour’s youngest ever professional winner.

Buhai qualified for the LPGA Tour for the 2014 season at qualifying school.

She has an estimated net worth of $5 million which she has earned as a professional golfer.