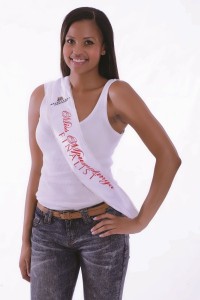 She has an estimated net worth of $100,000 which she has earned as a model and television presenter.