It is the terminus of the Shosholoza Meyl long-distance service from Johannesburg and Cape Town, as well as the centre of a Metrorail commuter rail network that stretches as far north as KwaDukuza (Stanger), south to Kelso, and inland to Cato Ridge. 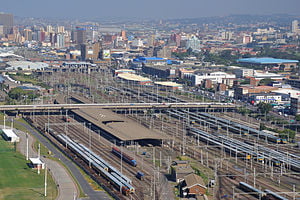