King Shaka International Airport is the main airport serving Durban, South Africa. It opened its doors to passengers on 1 May 2010, just over a month before the start of the 2010 FIFA World Cup, in La Mercy, KwaZulu-Natal, about 35 kilometres (22 miles) north of Durban’s city centre. 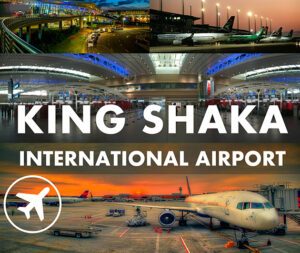