Eldorado Park is a Johannesburg neighborhood in South Africa. It’s in the City of Johannesburg Metropolitan Municipality’s Region G. It is located on the southern outskirts of Soweto and was a Coloured township during Apartheid prior to 1994. 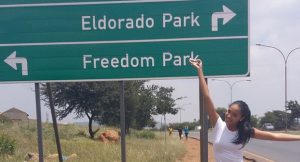 Under the Group Areas Act of 1965, the property was designated as a region for the exclusive settlement of Coloured South Africans:111 In 1970, it was annexed by Johannesburg. 111 The South African Police Service fatally shot local resident Nathaniel Julies on August 26, 2020.