The R503 is a Regional Route in South Africa that connects Mahikeng with Klerksdorp via Lichtenburg and Coligny. 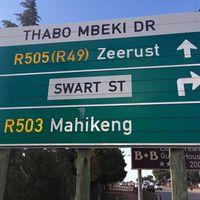 The R503 begins in the town of Mahikeng, the capital of the North West, at a four-way-junction with the N18 National Route and the R49 Route. It goes south-east for 62 kilometres, forming the southern border of the Mafikeng Game Reserve, bypassing Itsoseng, to the town of Lichtenburg, where it enters in an easterly direction and meets the R505 Route.

The R505 joins the R503 and they are one road eastwards into the town centre as Swart Street, then southwards as Nelson Mandela Drive, to meet the R52 Route at the junction with Gerrit Maritz Street.

From Coligny, the R503 goes southwards for 52 kilometres to the town of Hartbeesfontein, where it meets the R507 Route east of the town centre. The R507 joins the R503 and they share one road south-east for almost 2 kilometres before the R507 becomes its own road westwards.

From Hartbeesfontein, the R503 goes south-east for 20 kilometres to enter the city of Klerksdorp and reach its terminus at a T-junction with the N12 National Route in the suburb of Freemanvile (west of the town centre; north of Jouberton).