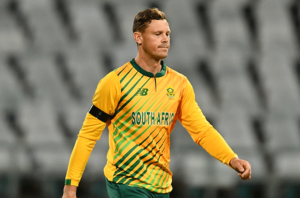 He was born on the 4th of December 1991 in Cape Town, Western Cape, South Africa. As of 2021, he is 30 years old and celebrates his birthday on December 4th every year.

In August 2017, he was called to Benoni Zalmi’s squad for the T20 Global League’s inaugural season. The tournament was originally delayed until November 2018 by Cricket South Africa, but it was then cancelled shortly after.

Linde took his tenth five-wicket haul in first-class cricket in the 2019–20 CSA 4-Day Franchise Series in January 2020. He won the four-day cricketer of the year trophy at Cricket South Africa’s annual awards ceremony in July 2020.

Linde was added to South Africa’s Twenty20 International (T20I) squad on 5 September 2019, but he did not appear in the series against India. On October 19, 2019, he made his Test debut for South Africa against India.

He has an estimated net worth of $400,000 which he has earned as a cricketer.