Jacques Alberts (born 17 January 1991) is a South African rugby union player, currently playing with the Falcons and His regular playing position is lock. 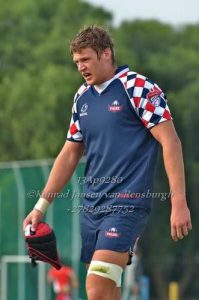 He was born on the 17th of January 1991 in Johannesburg, South Africa. As of 2022, he is 31 years old and celebrates his birthday on January 17th every year.

As a 20-year-old, he made his senior debut in the Falcons’ 2011 Vodacom Cup match against Western Province, which was his only appearance of the season.

He returned to the first team for the 2012 Vodacom Cup competition, making five appearances after further participation with the Under-21 side in the latter half of 2011. He also had the chance to play Currie Cup rugby, making his debut against the Griffons in that competition.

He has an estimated net worth of $100,000 which he has earned as a rugby union player.