Cheslin Kolbe (born 28 October 1993) is a South African professional rugby union player who currently plays for the South Africa national teamand for Toulon in the Top 14 in France. 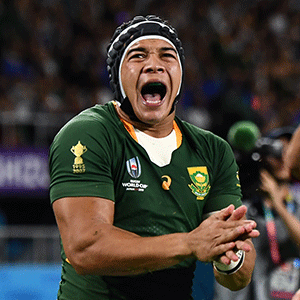 He was born on the 28th of October 1993 in Kraaifontein, South Africa. As of 2021, he is 28 years old and celebrates his birthday on October 28th every year.

He made his provincial first-class debut against Boland Cavaliers in the Vodacom Cup, and a month later, he was selected on the Stormers’ Super Rugby bench against the Sharks. For the 2017–2018 season, Kolbe joined Top 14 side Toulouse in France.

For the 2018 Rugby Championship, Kolbe has been called up to the South African national squad. He made his South Africa debut against Australia in Round Three of the competition on September 8, coming on as an injury replacement for Makazole Mapimpi in the 33rd minute, in a match that South Africa lost 18–23.

He was a member of the South Africa team that won the 2019 Rugby World Cup. Playing at right wing, he scored South Africa’s second try in the final minutes of the final.

He has an estimated net worth of $500,000 which he has earned as a rugby union player.