Elton Jantjies (born 1 August 1990) is a South African professional rugby union player for the South Africa national team, the Lions in Super Rugby and the Golden Lions in the Currie Cup. 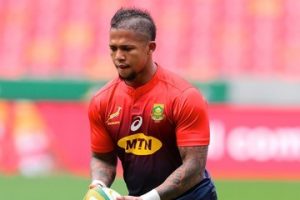 He was born on the 1st of August 1990 in Graaff Reinet, South Africa. As of 2021, he is 31 years old and celebrates his birthday on August 1st every year.

Jantjies debuted for the Lions in Super Rugby in 2011. After the Lions were relegated from the South African conference, he was loaned to the Stormers for the 2013 season.

In comparison to the previous season with the Lions, where he had an 86 percent goal-kicking success rate, his time with the Stormers was a failure. He rejoined the Lions, who had been relegated from the Super Rugby tournament.

On September 29, 2012, he made his international rugby test debut for South Africa against Australia in the inaugural Rugby Championship, but his first appearance for the Springboks was in a non-test, uncapped game against the Barbarians in the 2010 end-of-year tests.