Jaco Kriel (born 21 August 1989 in Standerton, South Africa) is a rugby union player for Gloucester who plays as a flanker. 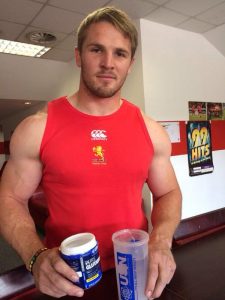 Kriel was named to a 31-man South Africa squad for a three-test match series against a touring Ireland team on May 28, 2016.

In 2017, Kriel was a member of the Springbok side that won the mid-year test series against France 3-0. After regular captain Warren Whiteley was injured during the test series against the French, Kriel took over as captain of the Lions for the remainder of the 2017 Super Rugby season.

Kriel was released from his contract with the Lions on April 30, 2018, and went to Gloucester Rugby to work with former coach Johan Ackermann.

Kriel returned to the Lions on a three-year deal on February 3, 2020, according to the club.