Aphelele Fassi (born 23 January 1998) is a South African professional rugby union player for the Sharks in Super Rugby and the Currie Cup. 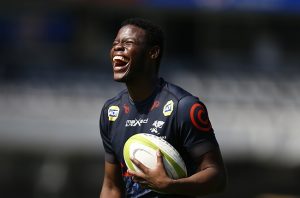 Fassi made his Test debut against Georgia this winter, where he scored his first international try playing at left wing.

He added to that tally in his second Springbok game against Argentina in Gqeberha during the Rugby Championship.

He has an estimated net worth of $300,000 which he has earned as a rugby union player.