Droëwors is Southern African snack food, based on the traditional, coriander-seed spiced boerewors sausage. It is usually made as a dunwors (Afrikaans for “thin sausage”) rather than dikwors (“thick sausage”), as the thinner sausage dries quicker and is thus, less likely to spoil before it can be preserved. If dikwors is to be used, it is usually flattened to provide a larger surface area for drying. 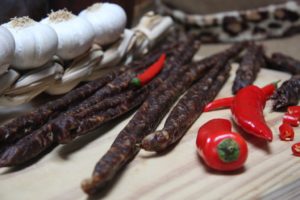 The recipe used for these dried sausages is similar to that for boerewors, though pork and veal are usually replaced by beef, as the former can go rancid when dried, mutton fat replaces the pork fat used in boerewors. Drying makes the sausage ideal for unrefrigerated storage.

Droëwors is unusual among dried meats in being dried quickly in warm, dry conditions, unlike traditional droge worst Italian cured salumi, which are dried slowly in relatively cold and humid conditions.