Almost everywhere in the world saw a rise in life expectancy throughout the twentieth century .

The HIV epidemic, which erupted in southern Africa in the late 1980s and early 1990s, caused a sharp spike in mortality among adults of working age .

There was also a significant impact on households, communities, and governments as a result of the drop in adult life expectancy: a decrease in household wealth, a rise in the number of children left without parents, the exodus of professionals like teachers and doctors, as well as a break in the transmission of knowledge and norms across generations. 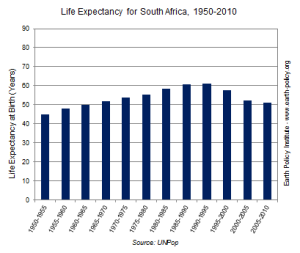 Antiretroviral therapy (ART) for HIV began to be widely distributed throughout southern Africa in the early 2000s, frequently with the help of international donors.

ART is a medicine cocktail that prevents HIV from replicating, boosts the immune system, and increases the lifespan of persons living with HIV .

In South Africa, Malawi , and other countries receiving US government funding for HIV programs, population-level decreases in HIV-related and all-cause death have been recorded .

ART’s effect on adult life expectancy in hard-hit communities has yet to be studied at the population level.

The term “life expectancy” refers to the average number of years that a person will live, and it is frequently used to compare mortality rates between different groups and through time .

Governments, funders, and individuals whose plans for the future will be influenced by changes in the predicted length of life are all interested in adult life expectancy because HIV mostly affects working-age adults.

For example, the average lifespan of a 15-year-old is defined as the average number of years an individual can anticipate to live if they are subjected to a  population’s age-specific mortality rates throughout time.

Adult life expectancy cannot be used to predict the average age at which a cohort will die, because future mortality rates are uncertain, with the exception of the rare circumstance where age-specific mortality rates remain constant in the future.

People’s mortality experiences are summarized by life expectancy, and this is the best way to think about it.

For HIV-infected adults in South Africa, government clinics and hospitals began providing ART in 2004 to achieve universal coverage for those who fulfill disease-stage eligibility criteria.

Since its inception in September 2004, the HIV treatment program run by the African Centre for Disease Control has seen an influx of patients.

Nurses at community-based health centers are in charge of administering the program, which is mostly funded by the government.

Funding for this initiative has been provided by the  President’s Emergency Plan for AIDS Relief from its launch by the Africa Centre (27).

About a quarter of all HIV-infected adults in this town were receiving care from the public sector HIV treatment program as of July 1, 2011, 12.6 percent of persons ages 15–49.

There has never been much use of antiretroviral medications in the private sector in this region due to the prohibitively high price tag.

One of the biggest changes in HIV treatment options occurred when the public sector began to increase the use of antiretroviral therapy (ART).

Analysis of trends in adult life expectancy before and after ART became available in the public sector was conducted using a continuous-time approach (28,29).

There were different survival curves for each year computed using the Kaplan-Meier estimator (30).

The area under the estimated survival curve was used to compute the average life expectancy for adults.

Ages >95 years have a dearth of data on which to base single-year estimates of adult life expectancy.

Because the oldest cohort  member’s age varies with time, we calculated life expectancy between the ages of 15 and 95.

95 percent confidence intervals were established for each annual estimate (28).

There was a 0.12-year difference in adult life expectancy from 2000–2011 based on the pooled data (0.04 years in  men’s estimates, 0.18 years in  women’s estimates) and these constants were incorporated into all estimations to account for surviving beyond 95 years old.

On the other hand, we examined changes in mortality rates, as well as changes in life expectancy (the 50th percentile).

We established the median survival time confidence interval by defining the range of times for which the confidence bands on survival function contained 0.5.

Confidence intervals (1001 samples) were computed for the change in adult life expectancy from 2003 to 2011 and for the difference in median life span.

Poisson regression with log-exposure time as the offset was used to estimate rate ratios for the change in age-specific death rates from 2003 to 2011, for age intervals of 10 years, from 2003 to 2011.