The Nelson Mandela National Museum, also known as Mandela House, is the house where Nelson Mandela lived from 1946 until 1962 on Vilakazi Street in Orlando West, Soweto, South Africa.

It’s at number 8115, on the junction of Vilakazi and Ngakane streets, just up the road from Archbishop Emeritus Desmond Tutu’s home, Tutu House.

On September 1, 1997, Mandela donated the house to the Soweto Heritage Trust (of which he was the founder) to be used as a museum.

In 1999, it was designated as a National Heritage Site. 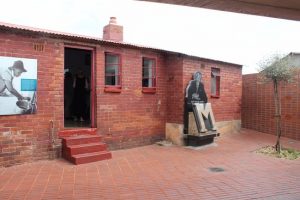