Bloemfontein City Hall is the home of the local city council in Bloemfontein. The structure was finished in 1936 and vandals set fire to it in 2017.

The structure is located on President Brand Street, near to the South African Supreme Court of Appeal, and faces Hertzog Square. 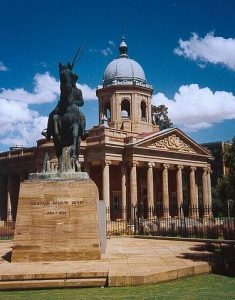 Gordon Leith designed the building, which is made of sandstone. The council meeting chamber is located behind the city hall’s eastern entrance. With two towers, the entry on President Brand Street is symmetrical. The east entrance has neoclassical features thanks to the pillars. Signs signifying Stadhuis and City Hall sit above the symmetrical entrance. The former city coat of arms is located above these.

New municipal offices were built alongside the structure in the 1980s. The town hall has been used by the local administration even after municipal government changes in 2000 and its reclassification in 2011.