The Durban Juma Mosque is a mosque in Durban, Kwazulu-Natal, South Africa. It serves as a worship centre for Durban’s Muslims and is also known as the Grey Street Mosque.

Aboobaker Amod Jhaveri and Hajee Mohamed purchased a plot of land in Grey Street (now known as Dr Yusuf Dadoo Street) from K. Munsamy for £115 in August 1881 to build a mosque. The mosque was built out of a small brick and mortar building that once existed on the site. 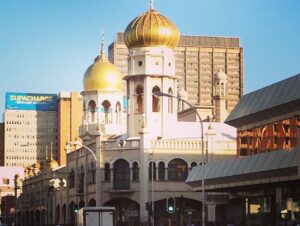 Registering the Birth of a Child Born out of Wedlock in...