We have more than 30 newspapers that are majorly printed in the English language in South Africa. As of 2017, we had about 22 daily newspapers being printed and 25 weekly newspapers.

I will be showing you the top 10 national newspapers in SA in which you can settle with one of them and read every day. 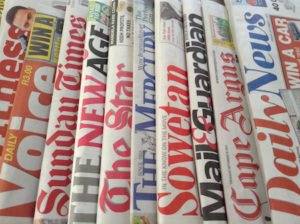 Business Day, established in 2001, is a daily business newspaper having both daily and Sunday titles which are detailed with business and financial information

This is a South African business publication focused on reaching the country’s top business people. This weekly publication, which was launched in 1959, underwent a major “look and feel” change in 2006, which saw it reclaim its position as the most widely read English business weekly in the country.

Cape Business News is the leading industry, commercial, business and manufacturing specialist newspaper for the Cape. The newspaper provides business readers with comprehensive news on a monthly basis with extensive coverage of the Cape Town general business trends, events, statistics, new products, services and projects. Cape Business News is primarily a promotional vehicle for companies which have the Cape Business community as a primary target market.

The Sowetan is an English-language South African daily newspaper that started in 1981 as a liberation struggle newspaper and was freely distributed to households in the then apartheid-segregated township of Soweto, Johannesburg, Gauteng Province. Currently, it is one of the largest national newspapers in South Africa.

The Mirror – Zoutnet is known as a very popular Daily News for the northeastern part of South Africa.

Cape Argus is a daily newspaper published by Sekunjalo in Cape Town, South Africa. It is commonly referred to as The Argus. Although not the first English-language newspaper in Southern African the Cape Argus was the first locally to use the telegraph for news gathering.

Anyone of these newspapers that interest you, you can pick it up and be reading every day

How to Register an NGO in South Africa