Leisure is one thing that is inevitable in one’s life. Also referred to as free time, it is the time spent away from the business, work, job hunting, domestic chores, and education according to Wikipedia.com. It might take the form of bicycling, bowling, and curling, amongst others.

One place we can also spend our free time is the beach, and South Africa is home to many fascinating beaches. According to Flight Network’s publication as regards the best beaches in Africa, eight South African beaches can be seen in the ranking of the top 50 beaches in South Africa.

So are you looking for a cool beach to spend quality time with your family or friends, boyfriend or girlfriend?  Then stick with us as we look to explore the ten best beaches in South Africa.

The Noetzie beach is located in Plettenberg Bay, just to the east of Knysna and it is known for its historic castles built in the 1930s. The Noetzie beach a conservancy owing to the fact that it is one of the last remaining abode for the very rare African Black Oystercatcher.

Coffee Bay is situated on the Wild Coast of the Eastern Cape Town of South Africa which stretches for 160 kilometres south from the Kei River mouth to port Edward in the north and approximately 100 kilometres inland. In Coffee Bay, which is a small seaside village, there is a Hole in the wall which is scored neatly into a cliff that extends over the beach.

Its sheer untouched beauty is 10 out of 10, and it is highly remote, as it scores 10 out 0f 10 in terms of remoteness. The sand and water quality is also very nice as it also has a score of 10 out of 10 according to Flight Network. Coffee bay boast of 229 annual days of sunshine, with an average annual temperature of 23C.

Set against the backdrop of the majestic Table Mountains, the idyllic white sand and grassy knolls make the Camp’s beach a perfect spot for relaxation. The camp’s beach is kind popular owing to the fact that it is a celebrity spot. In terms of sheer untouched beauty, camp’s bay scores 8 out of 10, and 7 out of 10 in terms of remoteness.

The sand and water have a rating of 10, and it boasts of 229 annual days of sunshine according to flight network. The average annual temperature of Camp bay stands at 14C.

Its sheer untouched beauty is rated 8, remoteness 7, and sand and water quality 6. Hobie beach boast of 275 annual days of sunshine, and an annual temperature of 24C according to flight network. Hobie beach is found in the vicinity of Shark Rock Pier and the Boardwalk of Port Elizabeth.

The Hobie Beach is the venue for the annual Splash Festival, which features beach volleyball and world boardsailing championships. It is also a favourite for swimming, sunbathing and body surfing. The sheltered rock pools make sea life interesting to observe.

The pristine wilderness, golden sand and sparkling blue water make this beach a fascinating one. It is bordered by the towering Outeniqua Mountains and adjacent to numerous rivers, lakes, and lagoons. Situated in Garden Route, wilderness beach have an average annual temperature of 18C, and 234 annual days of sunshine.

Bookended by the soaring Chapman’s peak and the regal Kommetijile lighthouse, the Noordhoek Beach is backed by preserved wetlands that dissolve into majestic slopes covered in coastal fynbos, which are small heather like trees and shrubs.

The thousands of colourful fish hovering near the shore make swimming very interesting and thus a perfect place for relaxation. It has a rating of 7 when it comes to sheer untouched beauty, 7 in terms of remoteness, and 8 in terms of Sand and water quality. The Noordhoek beach has an average annual temp of 23C, and 241 annual days of sunshine.

Known for its turbulent and powerful water, the Diaz beach provides a beautiful display of powerful waves crashing into pristine sands surrounded by vegetation-covered cliffs.

According to the flight network, it has a rating of 8 when it comes to sheer untouched beauty, 6 in terms of remoteness, and 8 when it comes to sand and water quality. Located in Cape Town South Africa, the beach has 241 days of annual sunshine and an average annual temperature of 23C. 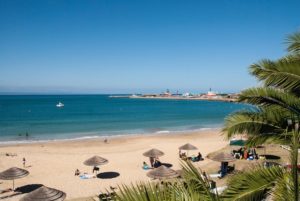 Located in Mossel Bay, Santos beach is a delightful beach frequented by holiday-makers and locals all year round. The gradually sloping and small waves make the Blue flagged beach a fascinating view and a cool relaxation spot.

There is so much life in this beach especially during the festive period (December and January), as there are live entertainment and activities. Also, there is a high level of security during this period owing to the fact they are lifeguards on duty every day to keep a watchful eye on the throngs of people that visit the beach. 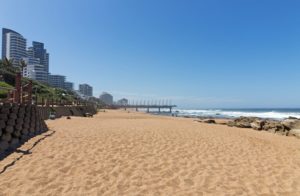 Umhlanga Rocks is a holiday resort village that is central to the Umhlanga coastal region, just North of Durban Often referred to as “Joburg by the sea” owing to the large number of holidaymakers who flock to the beaches from Gauteng.