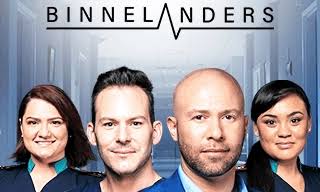 Social Media lets the spotlight fall on one person. Ilse is not the only one with a secret, while Gaby poses an important question to Danny. Family piques Annelize’s interest, and Joline has stars in her eyes. Father Christmas can’t be found anywhere.

Music is the perfect plaster for heartache, while Annelize catches Naomi off guard with a charity project. Steve can’t pull the wool over Lexi’s eyes. Tracy has a lot to think about – and a weighty decision to make. Danny can’t believe his ears, while Jared is scared and at his wit’s end.

Danny thinks he smells a rat, while Steve’s past catches up with him quicker than he is prepared for. Rian and Tertius try their best to work together, while a patient upsets Gaby tremendously. Joline’s admiration leads to a brilliant idea – and action!

Gaby tries to devise a plan to conquer her fears, while Steve blames Danny for his own actions. Annelize has to send a very emotional nurse home, and Lexi’s curiousity is curbed by a warning. Naomi and Joline’s viewpoints differ greatly, while Louis is asked to perform in Doepa.

Rodney’s words hit Gaby hard – and it doesn’t go by unnoticed. Annelize wonders how Steve’s family drama is influencing him, while Steve becomes more bitter about the past as a consequence to Marissa’s actions.

Louis’s performance garners a variety of reactions, while Tertius is torn between the women in his life.

Louis’s performance has triggerd more interest. Steve shares his dilemma regarding Jared with Marissa, while Annelize’s ‘advice’ to Gaby causes tension between her and Tertius. Steve doesn’t guard his tongue, while his actions scare the kids.

Naomi’s encouragement could influence Louis’s decision, while the ghosts of Steve’s past force him to make a drastic decision. Gaby meets Ayanda – and shares good news with Karen.

Steve puts all his cards on the table with Bronwyn, while a project encourages Annelize to think about the future. Conrad is concerned about a shareholder, and Gaby will have to work very hard to make a good impression on her new patient. Vulnerability and temptation are dangerous friends.

A discovery turns Steve into a very hard man, while an accident brings closeness. Naomi’s exhausting day goes unnoticed. Marissa is expected to clean up a mess that she helped create, and Tertius is not impressed with Gaby’s new work circumstances.

Marissa doesn’t have the easiest of tasks on hand, while Annelize is caught off guard by something that she observes. Joline tries to remind Louis of what is important, while Louis chases his dreams. Despite the fact that Gaby is finding her feet, the rug is still pulled from under her regarding her work.

A confession is the pin that is pulled from a granade, and Tertius is not impressed by Annelize’s suspicions. Vicky’s anxiety doesn’t go unnoticed, while Louis’s big dreams could be futile when David wants to see him.

Bronwyn has to silent Steve’s fears, and Naomi’s patience is put to the test. Vicky’s question shocks Tracy almost as much as a massive bill. Doubt becomes the subject matter of a jovial conversation, while Conrad doesn’t count his words during a serious conversation. The claws come out before a big function!

Second chances are a rare phenomenon. Annelize words her frustrations while Karen shares her conern for her friend. An interview and a release could change Louis’s life, while Naomi will have to learn to stand her ground. Harsh words fall between Gaby and Tertius, and Steve makes a decision about his future.

Conrad is concerned about the future, and Marissa makes a very big promise to Lexi. Louis surprises Naomi with a decision, while Steve has to make peace with Jarod. Gaby organises a night in Doepa to showcase her feelings, and Louis gets a taste of the spotlight. Diamond makes contact with Tracy.

Naomi has to ask a known familiar for assistance, while Uys meets an unknown stranger. Gaby’s questions lead to new concerns, and Rian’s research gets someone’s attention. Tracy has no desire to face her past, while interest is a two-way street.

A lie leads to a guilty conscience, while Rian is impressed by insight. Louis is surprised by a visitor – but Naomi is more surprised by marketing techniques and missing money. A journal leads to a deeper conversation, and Tracy’s past lands up in ER.

Tertius questions Rian’s motives, but Rian thinks Tertius should investigate his own prejudices. Naomi confronts Louis about his deeds, while Gaby gets a lesson in physics. Flirting will definitely not be allowed, and Naomi is not sure that she can trust what she saw.

Yolandi sculpts the truth, and Louis questions Naomi’s suspicions. A nasty surprise awaits Gaby, while negative feedback derails someone’s day. A life threatening situation paves the way to a truce. Conrad is not impressed by the truth – especially if it endangers Tracy!

Louis’s discovery leads to bigger problems. Gaby and Annelize have an uncomfortable interaction, while Ayanda receives good news. Yolandi’s seductive stories leads to a huge falling out, while Gaby and Tertius try to find common ground. The hijacking is on everyone’s lips.

Conrad’s doubts aren’t silenced by the police, while Yolandi uses her silky tongue to sow trouble on many levels. Naomi is forced to ask Kobus for help at Doepa, while her trust is crumbling after a conversation with Joline. An observation lends more truth to a story, and a deadly plan is revealed.

The truth causes harsh words, frustration and pain. Binneland Stereo is on a roll regarding a patient that is admitted – especially when they ask about Elise! An appointment makes Louis very uncomfortable. A discussion between Conrad and Yolandi torments Tracy’s imagination – and makes her blood boil!

The Good Son Teasers for September 2021