Emile Baron (born 17 June 1979 in Fish Hoek, Western Cape) is a South African retired footballer who played as a goalkeeper for South Africa. 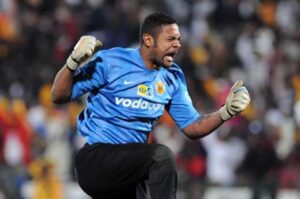 Baron made his international debut in a friendly against Saudi Arabia on 20 March 2002 and has so far been capped 4 times.

He was also a participant at the 2004 African Nations Cup. In April 2010, he got a shoulder injury which caused him to miss the 2010 FIFA World Cup

He has an estimated net worth of $100,000 which he has earned as a professional footballer