Lerato Lamola (born 17 June 1986) is a South African footballer who last played as a forward for Lamontville Golden Arrows. 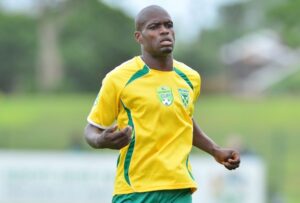 He bagged a degree in Logistics Management from the Tshwane University of Technology in 2009.

After completing his tertiary education, Lamola played for Tigers, Vardos and Roses United before he joined Bloemfontein Celtic in June 2013.

He later signed for Lamontville Golden Arrows in 2016 and was released by the club in 2020. Lamola made one appearance for the South Africa national football team in 2014.