Andre Arendse (born 27 June 1967) is a retired South African footballer who played as a goalkeeper. He now works as an assistant and goalkeeper coach for Bidvest Wits and has also been a co-presenter with SuperSport. 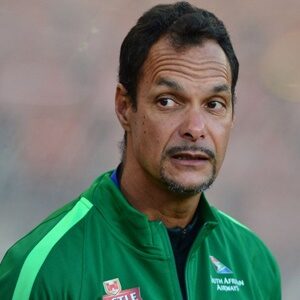 Andre Arendse made his debut in 1991 for Cape Town Spurs in the now-defunct NSL, being loaned to Cape Town side Santos in 1992. He later played professionally for Oxford United, Fulham (both England), Santos, Mamelodi Sundowns and SuperSport United.

Andre Arendse retired from football in 2009 winning the Premier Soccer League title with SuperSport United. In May 2013, he returned as an emergency goalkeeper for Bidvest Wits due to injuries to the club’s goalkeepers Steven Hoffman, Jackson Mabokgwane, Emile Baron and Ryan Harrison. This made him the oldest player in PSL history surpassing the previous record set by Bruce Grobbelaar.

He represented South Africa 67 times having made his debut in 1995. He was initially in the 1998 FIFA World Cup squad but had to pull out due to injury.

His replacement Paul Evans also withdrew through injury and was replaced by Simon Gopane. He was later a participant at the 2002 FIFA World Cup and retired from his international career in 2004. He was part of the squad that won the 1996 African Cup of Nations.