Sibusiso Zuma (born 23 June 1975) is a South African former professional footballer who played as a forward or midfielder. 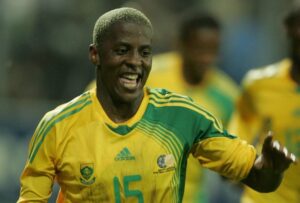 In June 2000, Zuma joined Danish club F.C. Copenhagen, where he blossomed as a player.

He helped the club win its second Danish football championship and was voted into the club’s hall of fame for his outstanding efforts in the 2004–05 season,

In 2006 Zuma was voted number one by the fans among the greatest profiles to have ever played in F.C. Copenhagen.

Zuma thinks he owes everything to FC Copenhagen and that he enjoyed every day he was at the club. It is a part of his life that he will never forget. Zuma also tells that “South Africans will tell you that Zuma is a king in Denmark”.

F.C. Copenhagen won its second Superliga championship in 2001 after almost a decade without becoming champions, winning 3–1 in the last New Firm match of the season, at the Parken Stadium. The 2–0 goal was a bicycle kick by Zuma, who received the ball at his chest, where he bounced it in the air, and in the same motion executed the overhead kick, volleying the ball into the far corner, out of Brøndby keeper Mogens Krogh’s reach. This was voted the Danish goal of the year, and was voted the best Superliga goal of the decade in December 2009.

On the day of the unveiling of the relief Zuma said: “It’s an honour to be here. I love those guys. I love F.C. Copenhagen fans to death. I am amazingly happy. It’s one of the best days in my life”.

After five and a half years at FC Copenhagen, Zuma was sold to German Bundesliga club Arminia Bielefeld for €1 million in July 2005.

On 21 June 2008, Zuma signed for Mamelodi Sundowns. He was released in the summer of 2009 and in October 2009 he had a trial period with FC Nordsjælland, eventually being signed by the club.

On 16 October 2009, he signed a one-year contract with the Danish club FC Nordsjælland. On 8 November 2009 Zuma scored his first goal for Nordsjælland in the club’s 1–0 win over SønderjyskE.

When Nordsjælland visited F.C. Copenhagen on 24 March 2010 in a Danish League match, Zuma played well and was substituted to a large majority of the F.C. Copenhagen supporters applauding him. A distinctly touched Zuma claimed that the home supporters were incredible.

He has represented South Africa 67 times. He played for his country at the 2002 FIFA World Cup. Zuma was the captain of South African National Team at the 2006 African Cup of Nations tournament.

In 2010, Zuma opened the Sibusiso Zuma Foundation which works with young kids with HIV.[4] The foundation also works with “prevention and education about HIV/Aids” and “the prevention of HIV infection and/or the distribution of information relating to HIV/Aids”.

Zuma says: “I’m just trying to help a lot of communities here in South Africa. Especially the poor ones.”

He is also known as “Zuma the Puma” to the club’s supporters and “Puma” appears on his shirt instead of “Zuma” in the Pro Evolution Soccer 2009 video game.

Other nicknames while he played in F.C. Copenhagen were Sibu or just Zuma.

On 25 June 2007, it was reported that Zuma had been involved in an incident in his home country South Africa. After an altercation, there were allegations that he threatened to shoot a group of men at a party in Kokstad.

The local police investigated the situation, and Zuma was prevented from leaving the country for a period, but no charges were made.

Zuma told in the 2002 documentary “Zuma the Puma” that his father was never very supportive of his footballing career, never believing in him, telling him he would never be good enough, never coming to his games and always working instead.

When Zuma moved to the Orlando Pirates in 1998, his father told him “The good players play on the national team.” Zuma’s father died the day before his son played his first game for the South Africa national team.