Bonang Matheba (born 25 June 1987) is an award-winning South African TV and radio personality. She is a fashion entrepreneur and the owner of Bonang Matheba Entertainment.

Bonang is best known for co-hosting the SABC Friday night music show, “Live” from 2007 to 2012. She is popularly known as Queen B. 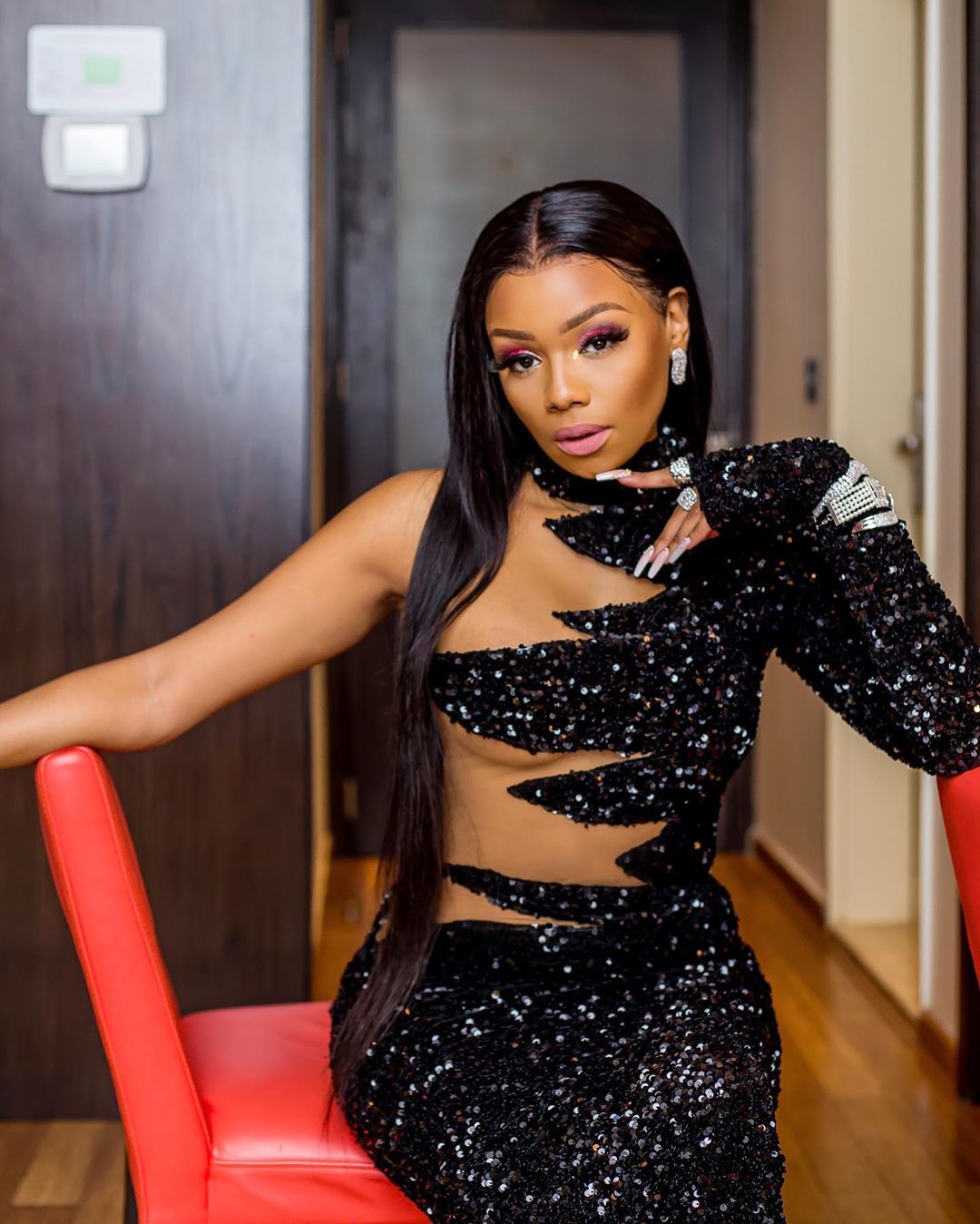 Her parents are Charlotte Mokoena and Andrew Gampi Matheba. They were her biggest role models growing up.

Her father, Andrew, was a senior lecturer at the University of North West while her mother serves as the Executive Vice-President for Human Resource and Corporate Affairs at Sasol.

Her parents separated when she was young but she says that despite the family breaking up‚ it never truly affected her. Matheba has an older sister, Reabetswe, who made it to the top 3 of Miss International South Africa 2018.  After her parents split, her mother remarried, giving birth to a son named Thabo.

Bonang’s family moved to Johannesburg when she was still a child. She lived in Hillbrow and Soweto’s Pimville community before making it big in the entertainment industry.

Matheba got a breakthrough when she was fifteen when she appeared on television on “Manhattan’s Fantasy Challenge.”After the show, she went back to study and enrolled in a course dealing with marketing at the University of Johannesburg.

She attended Fourways High School, Johannesburg and went on to take her a marketing course at the University of Johannesburg.

Bonang had to drop out of school due to the pressure that came with the popularity and focus on her career.

Matheba dated record producer and disc jockey Euphonik. Euphonik was charged with assault after it surfaced that he physically assaulted her.

Bonang Matheba’s relationship with rapper AKA was the talk of the town in 2015. The couple’s romance allegedly started while AKA’s girlfriend, DJ Zinhle, was pregnant with their first child.

Zinhle made the accusation on her blog in a post about their break-up. Both Bonang and AKA denied the cheating claims and threatened to sue. Neither one ever did, and it soon became clear they indeed were a couple.

After months of toying with their fans, AKA and Bonang made their relationship official on Instagram in 2016. Their romance ended in late 2017.

After joining ‘Live’ she became an overnight sensation and the most sought-after celebrity in South Africa. She gave herself the title ‘Host with the most’.

In 2008, Bonang launched her clothing line which she called Just B. She partnered with a retailer called Legit and later on worked with a designer based in London to make handbags.

The brand was then called The Baby Star. Then in 2009, she sent a demo tape to a radio station called Y-Fm but was rejected for two years.

Later on, she received her show called the B-hive which caught the attention of many young listeners. In 2014, Bonang worked with Woolworths to start a lingerie line called “Bonang for distraction.”

In the very same year, she became the new radio deejay for Metro FM after replacing Siphokazi who had initially replaced Azania Mosaka.

The Front Row had many listeners until a dispute took place with the manager pertaining an on-air reshuffle with her rival Lerato Kganyago without her being notified. She resigned from the radio station the next day.

In 2016, she became the ambassador of Ciroc vodka in Africa with a fashion designer called David Tlale and other deejays and artists.

In 2017, she went to Brazil, and after the trip, she became the African brand ambassador for Ipanema Sandals. During her tour in Brazil, she met with the sandal makers and went ahead to shoot an advertisement in Rio de Janeiro.

In 2007, a reality show was released called “Being Bonang.” Later on, the show became very popular since it was airing her day to day life. In May 2018, Season two was released, and it is available on DStv channel 103.

Bonang Matheba released her best-selling book, From A to B, in 2017. She detailed her journey to stardom in the book and shared some intimate details about her life.

She has an estimated net worth of $7.2 million. This is expected to have increased with Queen B establishing several businesses and the launch of BMoji, an emoji app.

Bonang also has her own lingerie line with Woolworths and a T-shirt line with Superbalist.