Dumisani Zuma (born 22 May 1995) is a South African soccer player who plays as a midfielder for Kaizer Chiefs and the South Africa national football team. 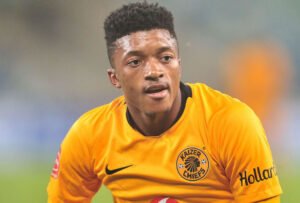 Born in Pietermaritzburg, Zuma started his youth career at the age of 11 with amateur side Grange and played for Maritzburg City before moving to Kings United in 2010.

At the beginning of the 2014–15 season, Zuma joined South African Premier Division side Bloemfontein Celtic from Kings United. He impressed early on in his spell at Celtic, with manager Ernst Middendorp describing him as ‘one of the best young talents he had ever seen’.

In July 2017, Zuma signed for fellow South African Premier Division side Kaizer Chiefs on a three-year contract. His first goal for the club came on his 11th appearance for the club on 16 December 2017 in a 1–0 victory over Ajax Cape Town.

In September 2019, Zuma signed a new contract with Chiefs, lasting until July 2023. Zuma made his first start of the 2019–20 season on 6 November 2019, scoring a brace in a 2–0 victory against Chippa United with the first of his goals winning him the South African Premier Division Goal of the Month award for November 2019.

Zuma grew up supporting Kaizer Chiefs since the rest of his family also supported the club. His mother died in 2010 and his father died two years later in 2012.