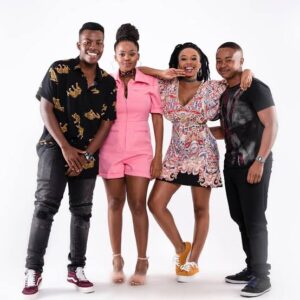 First Michael Jackson’s moonwalk now clingwrap?? Mpho makes a shocking discovery in the storeroom. Gadaffi decides to do the job himself this time.

Even good girls have to play dirty sometimes… Jerah wants to install a camera to catch their ‘ghost’. Mrekza’s worst nightmare comes true when history repeats itself.

Things are decidedly frosty between two close friends. Lucy is highly suspicious after Gog’Flo’s revelation. Mavusana has very interesting news to report to his boss.

Lesedi agrees to spy on someone. A gossip journalist is delighted about landing a juicy scoop. Fikile can see straight through her friend’s uncaring facade.

Jack instructs Luzuko to do what has to be done. Mrekza realises something is seriously wrong with him. Has Mpho bitten off more than he can chew?

Jerah cottons onto what Ruben is up to. Mazwi makes a shocking discovery at the lounge. Will Sphe risk her reputation to do what has to be done?

Lucy realises her husband is lying to her. Fikile agrees to help trap someone. Pele receives a tip-off and has to act fast.

Mrekza receives devastating news. Lesedi locks her ex in his room and quickly makes a call… Spororo is tasked to spy on a married woman.

Mazwi lets his fists do the talking. Jerah’s announcement leaves the family reeling. Just when Mpho feels things are looking up he’s dealt another blow.

Will Lucy buy her man’s big lie? Noxolo returns from the warden in a surprisingly good mood. There’s news from prison about Tau but it’s not good.

Tshidi gets more bad news and is determined something must be done. Nontle’s upset when her friends aren’t willing to help someone in need. Mrekza’s operation seems to have gone well… or did it?

Gadaffi’s not happy when Sphe plays hardball. Gog’Flo accidentally gives away a phone number to the wrong person. Fikile doesn’t like seeing a young woman being man-handled.

Tracy wakes up and is confused about what happened last night. Will Minister Mthembu step up to the plate to save Tau? Lucy realises she has a major problem on her hands.

Nontle is shocked by a grim warning and even more so by who it’s from. Suddenly Mpho has not one but two job offers. Tshidi reluctantly turns to her ex for help.

Things get heated between Ayanda and her colleague when they meet with a lawyer. Mrekza overhears a conversation which scares the hell out of him. Noxolo takes on an extra job – what is she up to?

Lucy hopes money will help her get rid of her problem. Gadaffi doesn’t take it lying down when his ex gives him a hard time. Tracy gets bad news but doesn’t want to believe it.

It’s easy to manipulate a man who’s lost his memory… Fikile realises she went about things totally the wrong way. Will a last ditch plan to help Tau also save his life?

An obsessive ex lover and a vial of drugs are not a good combination. Palesa gets a visitor who needs a favour from her. Zondiwe hears her daughter’s plan and thinks she’s lost her mind.

Reliving Michael Jackson’s Moonwalk has a surprising effect on Mrekza. Mpho doesn’t like having to lie to someone he cares about. Things can get tricky when ex-husband and wife are forced to work together.

Nontle refuses to let her mother ruin her plans. Noxolo is not about to allow a fool of a man to take what’s hers. Fikile realises nothing in life is given for free.

Zondiwe puts her makeshift family firmly in their places. Lucy receives a video on her phone and is horrified by what she sees. Gadaffi gets a phone call which changes everything.

Donations Made to Fight Coronavirus in South Africa