Hashim Amla (born 31 March 1983) is a former South African international cricketer who played for South Africa in all three formats of the game. 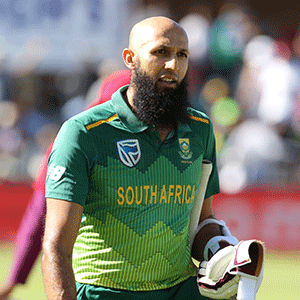 He is a right-handed batsman and holds the record for the highest individual Test score of any South African batsman of 311 not out, scored against England at The Oval, London in July 2012.

He has scored ODI centuries against all Test-playing countries and is only the fourth person to do so. He was named as one of the Wisden Cricketers of the Year in 2013. In 2017, he scored 2 centuries in the IPL, playing for Kings XI Punjab.

On 8 August 2019, Amla announced his retirement from international cricket.

Amla at fielding practise, Adelaide Oval, January 2009
Born in Durban to a Gujarati Muslim family originally from India, Amla is a devout Muslim. He was reared in a middle-class home and sent to the highly regarded Durban High School, which is also the alma mater of Lance Klusener and Barry Richards.

His elder brother, Ahmed Amla, was also a professional cricketer. Ahmed made his debut two years earlier than Hashim and they played together for a time at the KwaZulu-Natal Dolphins.

Hashim Amla is married to Sumaiyah and together they have two children.

Upon graduating from Durban High School and impressing on the youth circuit, Amla made his debut for his provincial team, the KwaZulu-Natal Dolphins, soon captaining South Africa at the 2002 Under-19 Cricket World Cup in New Zealand, leading his team to the final.

During his formative years, former Western Province captain and coach Hylton Ackerman had been influential in Amla’s development, first spotting his talent and honing his skills during his coaching career.

His promise led him to be appointed captain of KwaZulu-Natal at the young age of 21. Amla was cited as a future captain of South Africa ever since his first-class years. Amla moved from the Dolphins to Cape Cobras in 2013.

Amla played for the Trinbago Knight Riders in the Caribbean Premier League (CPL). He has scored 410 runs in 11 matches with a strike rate of 126.54.

Amla was picked for the 2016 Indian Premier League (IPL) by the Kings XI Punjab as a replacement for Shaun Marsh, after the latter’s injury. Since then, he has proved to be an integral part of the team’s batting lineup. He has scored 577 runs in 16 matches, which included two centuries and three half-centuries. He was named in the Cricbuzz IPL XI of the tournament.

In October 2018, he was named in Durban Heat’s squad for the first edition of the Mzansi Super League Twenty20 tournament.

Upon being appointed captain of the Dolphins, Amla began the 2004–2005 South African domestic season by scoring four centuries during his first eight innings.

His success at the domestic level and consistent performances for the South Africa A squad led to him being chosen for the winter 2004 tour of Africa at the age of 21, thereby becoming the first South African of Indian descent to represent South Africa in international cricket.

He has an estimated net worth of $1 million which he has earned form his career as a cricketer.