Mark Boucher (born 3 December 1976) is a South African cricket coach and former cricketer who played all three formats of the game. 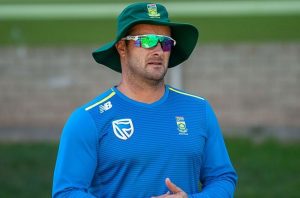 He was born on the 3rd of December 1976 in East London, Eastern Cape, South Africa. As of 2021, he is 45 years old and celebrates his birthday on December 3rd every year.

Boucher is recognized as one of the greatest wicket-keeper batters of all time, and he holds the record for the most Test dismissals by a wicket-keeper, with 532 catches and 555 dismissals overall.

Since the 1997/1998 trip to Australia, he has been a regular member of the South African team until his retirement from international cricket in July 2012, following a catastrophic eye injury against Somerset.

Boucher was South Africa’s first-choice wicketkeeper and is largely considered as one of, if not the best, wicketkeepers in the country’s history. In Test cricket, he holds the record for most dismissals (catches and stumpings) and is third all-time in One Day Internationals.

He has an estimated net worth of $500,000 which he has earned as a cricketer.