Menzi Ngubane (4 September 1964 – 13 March 2021) was a South African actor popularly known for his role as Detective Nkonzo Mazibuko on the Ashes to Ashes.

He appeared in a number of South African films, including How to Steal 2 Million, alongside John Kani, Terry Pheto and Rapulana Seiphemo.

He was born on the 4th of September 1964 in Ladysmith, KwaZulu-Natal, South Africa. He died at the age of 56 years old.

He was married to Sikelelo Sishuba. They had two children together. 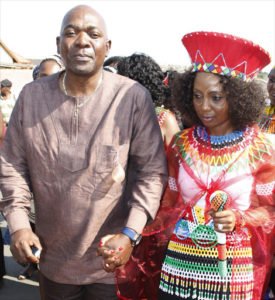 In 2008 he won the Star of Mzansi award and the R1-million prize.

Menzi Ngubane had an estimated net worth of $1 million. He earned the money being a professional TV Actor.

Before his death, Menzi Ngubane, who played Sibusiso Dlomo on SABC1’s Generations, was believed to have a take-home salary of about R100 000.

Ngubane suffered a stroke and died on the morning of Saturday, 13th March 2021 according to his family. He is survived by his wife Sikelelwa and two daughters.