Moeneeb Josephs (born 19 May 1980) is a retired South African professional footballer who played as a goalkeeper.

Josephs is a highly rated goalkeeper in South Africa. His ability to kick with both feet, play as a sweeper and distribute the ball comfortably are some of his traits. 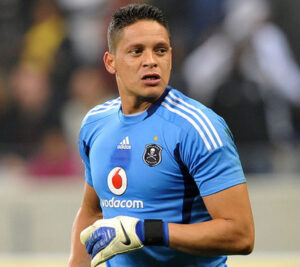 He began his career with Cape Town Spurs at the age of 17 in 1997 and played for its successor Ajax Cape Town for seven years.

In 2006, he moved to Gauteng where he played for Bidvest Wits for two years before moving to Orlando Pirates for a record-breaking fee.

He has played at international level for South Africa and was South Africa’s number one goalkeeper at the 2008 African Cup of Nations replacing the injured Rowen Fernandez.

He was not expected to see much playing time as back-up to Itumeleng Khune, but on 16 June 2010 he was called on as a 79th-minute substitute for Steven Pienaar following Khune’s sending-off against Uruguay.

Josephs was powerless to stop the resultant penalty from Diego Forlán as Bafana Bafana lost the match 3–0 with two goals from Forlan and a stoppage-time strike from Álvaro Pereira. Khune’s suspension meant that Josephs played in South Africa’s final group game against France, where they won 2–1 but were eliminated from the World Cup.

On 24 May 2012, he announced his retirement from international football.

He was called back after two years by Gordon Igesund for CHAN 2014 hosted in South Africa and he played a full match in the final group stage against Nigeria in 3–1 defeat in a place of injured Itumeleng Khune.

That was his final game for Bafana and he was personal criticize together with Lerato Chabangu for a loss against Nigeria by Minister of Sport and Recreation Fikile Mbalula, when he said: “Bafana Bafana are week, useless and they are the bunch of losers individual.”