Using building bricks instead of concrete blocks has long been touted as a cheaper and higher-quality option. In fact, the Egyptian pyramids were built with mud or clay bricks around 6,000 years ago, and they’ve been there for a long time in Africa.

It’s no secret that bricks have been utilized across the continent for hundreds of years, and now they’re making a resurgence due to numerous factors.

In terms of both cost and aesthetics, bricks can be a gorgeous, yet cost-effective solution when it comes to building houses. Unfortunately, South Africans tend to be logical people; thus, it is no surprise that they have embraced bricks as a means of providing adequate housing and making life better overall. 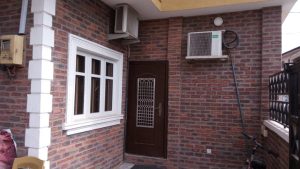 The Brick Clay Plaster is a standard red brick composed of clay and cooked in a fire.

This is the most traditional and well-known sort of brick. Brick clay plaster typically sells for around R2.52 per piece, though prices may vary slightly from one seller to the next.

This type of brick can be identified by its dark color, with some areas resembling charred black from the fire.

The Makoro Ingwe Satin Brick is a solid clay building brick. The bricks are typical size and cost roughly R3.37 per piece. These bricks can be identified by their light or brilliant red color, which makes them stand out. The bricks are sturdy and can be used for whatever purpose you have in mind.

Letaba Travertine is a high-quality solid red clay brick. These bricks are only R4.77, albeit there may be some variations in the costs given from supplier to supplier.

These bricks are the typical shape and size of regular bricks- you can identify them by their red colour, but you will also notice that there is no black hue, which is the signature of the brick clay plaster that we previously highlighted.

You can use them for whatever type of construction project you have in mind, and their excellence is proven by their price—these are the most expensive variety of red bricks in South Africa.

Letaba Satin is a type of red clay brick. This brick costs roughly R4.77 per piece, though pricing quotes may vary slightly from seller to provider. The red hue of these bricks, as well as the fact that the color is not mingled, distinguishes them.

Furthermore, the bricks are extremely smooth to the touch and as hard as granite.

These are really high-quality bricks that are suitable for any construction project you have in mind.

The brick stock Cemblock is a type of brick that is composed of cement and sand rather than clay. In South Africa, you can buy the brick stock Cemblock for around R2.69, though price quotes may vary slightly from provider to supplier. This brick is distinguished by its grey-whitish color and gritty, brittle texture.

This block is of very good quality; it is built of sand and cement, but the cement ratio is much higher than the sand ratio. These blocks cost roughly R5.37 each, and the price reflects the exceptional quality of the bricks.