Television broadcasting started in South Africa in 1976,  due in part to the influence of colonialism. Since then, the industry has grown to become a force to reckon with in Africa. Listed below are the top ten television channels in the country. 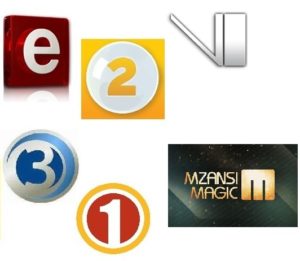 SABC1 can be likened to a truly South African brand. Its youthful outlook makes it the favourite of the young and vibrant. It is a community public service that is operated by the South African Broadcasting Corporation. It curates and produces local content that centres around music, fashion trends and videos.

SABC 2 is a national television with exceptional values of caring, sharing, love and respect that characterize a family. It aims to promote nationalistic tendencies and programmes such as “Morning Live”, ” State of the Nation address” and “Motsako”. It also broadcasts programmes on the country’s history.

e.tv is an independent and free-to-air television channel in South Africa. It is the biggest TV channel with the largest English viewing and speaking audience, broadcasting to about 78% of the South African populace.

It offers a full spectrum programming service that caters for all nationality and age groups. It is owned by Hosken Consolidated Investments Limited and Venfin Limited.

SABC3 is a television channel created in 1996 from the defunct SABC. Its primary audience is the English speaking South African community, mostly aged 18 – 19. Its programmes are a blend of internationally produced, as week as locally produced talk shows, drama series and soapies.

Soweto TV, based in Vilikazi in Soweto, is currently the largest community television channel in South Africa, boasting of over three million viewers. It is a free-to-air channel on the DSTV platform and can be found on channel 251.

This exclusive movie channel arose from the collapse of ActionX, B-grade movies and series channel on the DSTV platform in February 2008. It currently broadcasts different styles of movies from horror to SciFi, to action. It airs on channels 110.

Studio Universal is a speciality television channel created in February 2010 by Universal Networks International. It majorly broadcasts films produced by its parent company. It features interviews, insights, video clips that are centred around a particular theme or actor.

Mzansi Magic is another South African digital satellite television channel that is focused on locally produced general entertainment. It was started by Multichoice and currently run by M-Net’s local interest division. It airs on DStv.

Channel O is a music channel based in South Africa but focused on music produced in Africans home and in the diaspora. It organizes the annual Channel O Music Video Awards that recognises artists with a meaningful contribution to music.

Mzansi Wethu is a digital entertainment channel operated by M-net and aired only on the DSTV platform. It majorly features local content such as sitcoms, game shows and reality soap operas. Its main languages are English and vernacular.