Wandile Chamane is a South African actress and singer known for co-presenting the SABC3 magazine programme The Xtra Factor, a behind-the-scenes companion show to the SABC1 reality contest The X Factor. 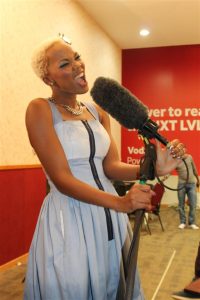 She began her career working at an event management company, where she planned numerous hip hop youth events, fashion shows, and weddings. She chose to move away from event planning in 2011 and altered the company’s main business and name.

She discovered her radio voice in 2013 and joined Vibe fm, a community radio station.

She has an estimated net worth of $100,000 which she has earned as an actress and singer.