Andries Botha (born 22 September 1952) is a South African artist and political activist based in Durban, KwaZulu-Natal. He is well-known for his. 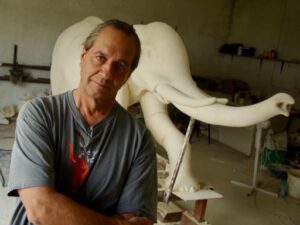 He was born on the 22nd of September 1952 in Pretoria, South Africa. As of 2021, he is 69 years old and celebrates his birthday on September 22nd every year.

Botha was a printmaker and sculptor as a young man, and he created and chaired the Community Arts Workshop (1984–86).

Progress on a sculpture he was designing for the eThekwini Municipality was suspended in 2010 because the idea was said to be too similar to a political party’s logo. The elephants were supposed to be the subject of the sculpture.

After years of discussions, a somewhat modified version was decided upon, and Botha resumed his work. Meanwhile, much of the structure built by Both has been looted and exchanged for scrap metal. Red and black paint were both used to deface the sculptures.

He has an estimated net worth of $100,000 which he has earned as an artist and political activist.