Mdee is popularly known for being the first-ever Tanzanian MTV VJ. She later rose to prominence as a radio and TV host, hosting Epic Bongo Star Search and Dume CHallenge for ITV Tanzania before signing to B’Hits Music Group in late 2012.

After joining B’Hits Music Group, Mdee collaborated with Tanzanian rapper A.Y. on a record ‘’Money’’ and Ommy Dimpoz, a Bongo Flava artist on a record Me and You that was later voted Song of the Year during the 2013 Kilimanjaro Music Awards.

She received an even bigger buzz with the release of her first solo single “Closer”, which in its first week was downloaded over 30,000 times, a feat achieved by no other Tanzanian artist. “Closer” remained on the charts for over 13 weeks.

In 2015 and 2016 she released three singles Nobody But Me, Never Ever and Niroge which were also received well. In July 2018, she was signed to Universal Music Group. 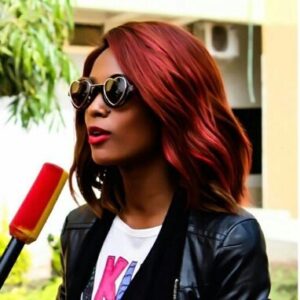 Vanessa Mdee was born on 7 June 1988, in Arusha, the third-largest city in Tanzania; located in Northern Tanzania. Mdee became familiar with various cultures after growing up in New York, Paris, Nairobi and Arusha.

She obtained her secondary and high-level education at Arusha Modern High School. Mdee attended university at the Catholic University of Eastern Africa to pursue a Law degree. Mdee quickly became familiar with many different forms of creative and performing arts.

In early 2007, Mdee got the chance to audition for The MTV VJ Search in Dar es Salaam. Afterwards, she joined Carol and Kule to host the Coca-Cola Chart Express.

By 2008, Mdee had established herself in Tanzania and around the continent, hosting shows in Nigeria, South Africa, Kenya, Mozambique, Angola, Uganda, and the Democratic Republic of Congo. She also became known in the United States and Brazil.

In early 2009 Mdee hosted Senses, Sounds and Wisdom with Zantel during the annual Sauti Za Busara International Music Festival, showcasing the ever-growing Swahili culture. Mdee’s fashion sense has made her the go-to girl at every MTV Africa Music Awards. She hosted the red carpet event for three years in a row.

Along with her pan-African weekly TV show, MTV’s Base Select 10 and daily radio gig, Mdee blogged as a roving reporter on behalf of MTV Staying Alive and UNAIDS on her Dynamites Mission website.

She was MTV’s voice at the 2011 UNAIDS Mali Youth Summit in Bamako and the subsequent High Level meeting in Cape Town, South Africa, She participated in the International Conference on HIV and STI’s in Addis Ababa, Ethiopia, and cofounded (along with M. K. Asante) STANDWIDTH, under the UNAIDS umbrella.

2012: MTV Base Meets and music premier

In 2012 Mdee hosted MTV Base Meets, a show geared towards empowering young Africans from around the world by giving them the rare opportunity to sit down with an influential leader.

People who have appeared on Vee World Wide include Keke Palmer, Carol Rodrigues, Da Internz, Keyshia Knight Pulliam, Letoya Luckett, DWoods, GOOD Music’s D’Banj and many more. Mdee was asked to audition for BET’s 106 & Park, although she did not get the gig.

Also in 2012, Mdee was awarded at a gala in New York City by the UNA-YP (United Nations Association of Young Professionals) for being an African change maker. In the same month, she was awarded by the GAVI Alliance for her support in the initiation of free vaccinations for Tanzanian children.

In May 2013, Mdee was invited to speak at the World Economic Forum for Africa in Cape Town, South Africa on behalf of the GAVI Alliance on the announcement of the new record low price for the Human Papillomavirus (HPV) vaccines.

Mdee launched her music career in 2012, working on the single “Me and You” by Ommy Dimpoz. A month later 13 January 2013 – she released her first single “Closer”. These scored her four nominations at Tanzania’s Music Awards (Kilimanjaro Tanzania Music Awards), including “Bongo Pop Song of the year”, which she won. She also won Collaboration of the Year.

In, 2013 Mdee got added to the Dar es Salaam hub of the World Economic Forum as a Global Shaper. In October 2013 Mdee joined the GAVI Alliance again at the UN General Assembly where she spoke on a panel with Yoweri Museveni, President of Uganda.

This trip ended with Mdee closing the NASDAQ by ringing the ceremonial closing bell, along with UNAIDS Executive Director Michel Sidibe and Ibrahim Boubacar Keita, President of Mali. Mdee was in turn awarded by the Global Health and Diplomacy for her work in advocacy.

Mdee hosted MTV Base’s Hunters Oasis; a music festival around Africa with appearances from some of the African continents hottest artists and DJs. She also hosted Tanzania’s Epiq Bongo Star Search Season 7 and Dume Challenge, seasons 1 and 2. Mdee also released her second single “Come Over” in November, 2013 which has been on charts in Tanzania, Nigeria, Uganda, Kenya etc.

‘Switch On’ Airtel Campaign; Vanessa Mdee is involved in the ‘Switch On’ campaign by Airtel that is about connecting users to the internet and charged according to the kind of device in use.

MTV Africa Music Awards; Vanessa Mdee alongside Nomuzi Mabena presented the Best Collaboration Award and Best Francophone Award. During the trip to Durban, South Africa she as an MTV VJ had an opportunity to sit down and interview Trey Songz, Miguel and French Montana all artists from the U.S.

Vanessa Mdee received an endorsement deal from Crown Paints, to be its brand ambassador in Tanzania. Crown Paints is a number one paint manufacturing company in Eastern Africa.

On 8 November, Vanessa Mdee joined forces with another Tanzanian songbird Barnaba Elias to release their latest up tempo Afro Pop duet Siri. It tells the tale of a cunning young man who tries to convince a young bride to embark on a love affair with him, with promises of plenty material things.

Despite her upbringing the story ends at a crossroads, leaving the listener wondering. Siri is already rising fast on the Tanzania radio charts plus East African charts. Later on 8 December, the much anticipated video for Hawajui was premiered on MTV Base and has gone on to capture the attention of the African continent and beyond.

Early this year, Vanessa Mdee signed a brand ambassadorship deal with Samsung Tanzania. Vanessa has continued to attract a lot of attention from plenty of corporations due to her enormous talent and continued effort to grow her brand.

On 26 March 2015, Vanessa Mdee released her fifth single Nobody But Me where she joins with heavy hitting South African rapper K.O on. Composed by Vanessa Mdee, Ntokozo Mdluli and Nahreel, the light-hearted collabo will transcend from the airwaves to the club. Nobody But Me is already topping charts in various countries in Africa.

On 4 April 2015, Mdee performed in Lagos, Nigeria at the Gidi Culture Festival known to be Africa’s biggest beach festival, that was presented by Eclipse Live and Lagos State. The festival was held at Eko Atlantic. Vanessa Mdee shared the stage with some of the continent’s top artists like Burna Boy, Awilo Longomba, M.I, Waje, Sean Tizzle, Victoria Kimani, Efya, Skales and many more. Vanessa Mdee was the only artist representing Tanzania at the festival.

On 13 May 2015, Mdee joined forces with arguably seven of Africa’s most popular songstresses for ONE mission and ONE mission only – Celebrating girl power! The campaign is calling on world leaders to put girls and women in the forefront in 2015. This is the year when the new development goals will be set by world leaders at the United Nations. Apart from Vanessa Mdee, the other artists are Victoria Kimani (Kenya), Judith Sephuma (South Africa), Waje (Nigeria), Arielle T (Gabon), Gabriela (Mozambique), Yemi Alade (Nigeria), Selomor Mtukudzi (Zimbabwe) and Blessing Nwafor. The song promotes the Poverty is Sexist Campaign globally, and will be officially launched in Nigeria, Mozambique, Zimbabwe and South Africa during the World Economic Forum for Africa and the African Union Heads of State Summit. The song is released in conjunction with a report by ONE titled, “Poverty is Sexist: Why girls and women must be at the heart of the fight to end extreme poverty”. The report shows how unlocking women’s economic potential could improve the lives of everyone in society. It also illustrates the structural nature of the social, economic, political and cultural barriers that militate against women and girls. The campaign has a petition which is calling on world leaders to track the fight against inequality and injustice by investing more in women and girls if the world is to end extreme poverty by 2030.

On 23 June 2015, Mdee took home two KTMA Awards for Female Artist of the Year and Best Female Entertainer. The awards were held in Dar es Salaam, Tanzania – which takes place every year.

Essence a popular US magazine – hadn’t shot a cover in Africa since 1978. They decided it was time. They travelled to East Africa and photographed Erykah Badu in Zanzibar, Tanzania and Nairobi, Kenya for the August issue. Vanessa Mdee features in this Essence issue where she opens up about Tanzania, her music, inspiration and many more.

The Mombasa Rocks festival was held at the Mombasa Golf Club – Kenya on 8 October 2016. Vanessa Mdee delivering an electrifying performance was among the headliners that featured international singing sensation Chris Brown, Nigeria’s Wizkid, Tanzania’s Alikiba and others. She also has a Bestfriend called Dorice

Fiesta Tour: Vanessa among other Tanzanian music artists have been touring various cities in the country. Vanessa has performed in Dodoma, Morogoro, Arusha & is set to perform at the finale in Dar es Salaam.

She has a net worth of $6 million which she has earned as a musician.