Christiaan Bezuidenhout (born 18 May 1994) is a South African professional golfer who is a three-time winner on the European Tour. 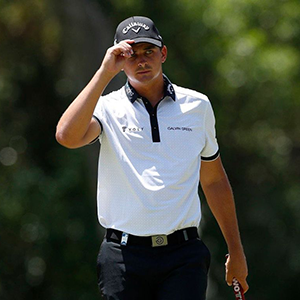 He is engaged to his Kristen Hart after popping out the question at the Delaire Graff Estate outside Stellenbosch on Thursday, March 19.

In early 2015, Christiaan Bezuidenhout became a professional. In September 2015, he had success on the Big Easy Tour, winning two 36-hole events, losing in a playoff for the Big Easy Tour Championship, and also winning the Order of Merit.

Bezuidenhout won the Sunshine Tour Q School in December 2015. He finished second to Brandon Stone in the first event of the season, the 2016 BMW SA Open, which was co-sanctioned with the European Tour.

In 2016, he won the Sun Fish River Challenge, a minor Sunshine Tour event, and placed runner-up in the Vodacom Origins of Golf Final.

In both the Eye of Africa PGA Championship and the Dimension Data Pro-Am, he finished in fifth place.

In the European Tour Q-School, he tied for 25th position and earned a spot on the main tour for 2018. In 20 of his 26 European Tour starts in 2018, Bezuidenhout made the cut. His highest placing was 17th, and he finished 105th in the Order of Merit, barely keeping his card for 2019.

Bezuidenhout was defeated by Lucas Herbert in a sudden death playoff at the Omega Dubai Desert Classic in January 2020. He had the outright lead going into his final hole, but his third shot found the water, resulting in a bogey finish.

He has an estimated net worth of $1 million which he has earned as a professional golfer.