Deepak Ram (born 11 May 1960) is a South African-born flutist, composer, keyboard player, and producer of Indian origin. Deepak is considered a master of bansuri, an Indian flute of ancient origin made from bamboo.

He is a senior disciple of world-renowned bansuri maestro Pandit Hariprasad Chaurasia under whom he studied Indian classical music.

Deepak’s versatile playing and breadth of musical repertoire melds classical and improvisational techniques of Indian Raga, Jazz, Blues and Flamenco into a fusion that has garnered critical acclaim internationally. 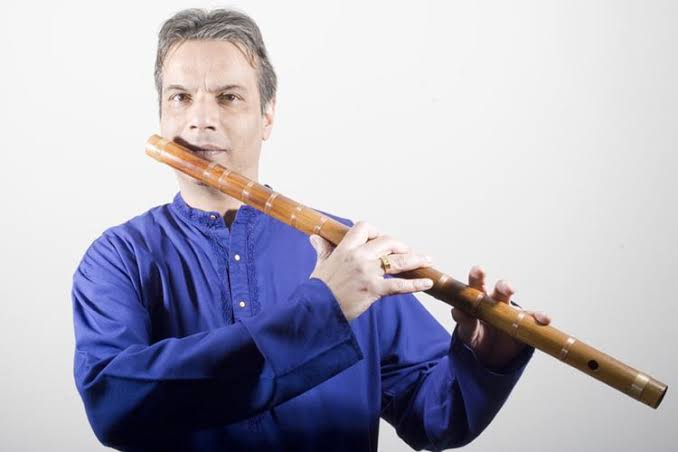 Deepak Ram’s great-grandparents were brought to South Africa to work on sugar cane plantations as indentured laborers. He was thus born in South Africa to second-generation immigrants during the apartheid era in the 60s.

A few weeks after his birth the family home in Sophiatown, a racially mixed area, was bulldozed under Group Areas Act for effecting racial segregation in Apartheid South Africa.

His family was forcibly resettled in Lenasia – an undeveloped township south of Johannesburg earmarked for those of Indian origin.

His earliest influences were the Jazz records his brothers listened to and the Bollywood and Indian music his parents listened to. His first flute was fashioned out of a drainpipe with six holes drilled arbitrarily on the sides.

Deepak Ram first travelled to India at the age of 16 where he received training in classical Indian music under the tutelage renowned flautist Pandit Hariprasad Chaurasia and the late Shri Suryakant Limaye. Before passing away, the latter bequeathed a collection of flutes to Ram.