Derrick America is a South African politician who is currently serving as a Member of the Western Cape Provincial Parliament, representing the Democratic Alliance. 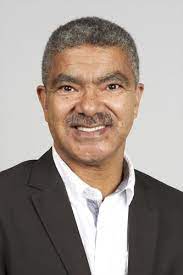 America went on to acquire a Bachelor of Commerce with Honours from the University of the Western Cape. His research interest was management and the labor market. He then went on to Curtin University in Perth, Australia, to earn a Master of Business Administration.

In May 2011, America was elected to the City Council of Cape Town for the first time. Until 2014, he represented people of Kensington, Factreton, and Maitland.