Elias Pelembe (born 13 November 1983) who is also known simply as Domingues, is a Mozambican footballer who currently plays for Bidvest Wits in the South African Premier Soccer League and Mozambique. 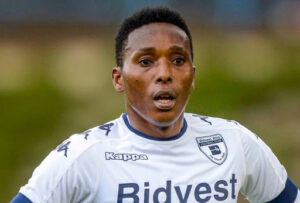 Domingues, as he is nicknamed, has been a revelation since coming to South Africa in 2007 from Desportivo Maputo. He was undoubtedly Supersport United’s most influential player when they won the 2007–08 Premier Soccer League and was subsequently voted PSL Player of the Season.

During the summer of 2009, he was rumoured to be closing in on a move to one of Europe’s bigger leagues as he had caught the eye of Tottenham Hotspur scouts following a string of impressive performers for club and the national team. Eventually, he was bought by big-spenders Mamelodi Sundowns where he was handed a substantial wage.

On 17 May 2017, Bidvest Wits were crowned 2016-17 Premier Soccer League Champions, following a 2-0 win over Polokwane City, beating his former club (Mamelodi Sundowns) in the title race.

Furthermore, the win also meant he successfully completed a League and Cup double, since Bidvest Wits also won the MTN 8 title earlier in the season, with a 3-0 win over Mamelodi Sundowns at the Mbombela Stadium, on 1 October 2016.

He is also an influential member of his country’s national team, the Black Mambas. He is currently their top scorer between players that are still actively playing.