Happy Jele (born 1 January 1987) is a South African footballer who plays as a defender for Orlando Pirates in the South African Premier Division. 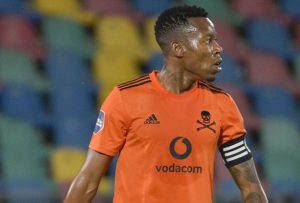 He was born on the 1st of January 1987 in Middelburg, South Africa. As of 2022, he is 35 years old and celebrates his birthday on January 1st every year.

When Orlando Pirates saw him, he was playing for Middelburg’s Walter Stars. In 2006, Happy Jele joined the team and has remained with the Bucs ever since.

Happy’s dream is to leave an indelible mark on the team’s history. Outside of sports, the defender enjoys giving motivational speeches at schools and volunteering at a Middleburg nursing home. He also runs his own company to help him prepare for life beyond football.

Jele has won all domestic trophies with Orlando Pirates. His trophy cabinet includes two league titles, two Nedbank Cups, the Telkom Knockout, and three MTN8 winners’ medals and will definitely go down as a legend of the Mayfair-based club.