Kgotso Moleko (born 27 August 1989) is a South African football (soccer) player who plays as a defender for Kaizer Chiefs in the Premier Soccer League. 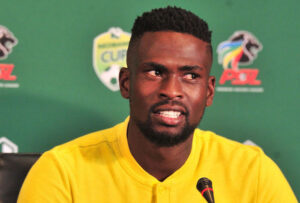 He was born on the 27th of August 1989 in Bloemfontein, Free State, South Africa. As of 2021, he is 32 years old and celebrates his birthday on August 27th every year.

He has an estimated net worth of $300,000 which he has earned a professional footballer.