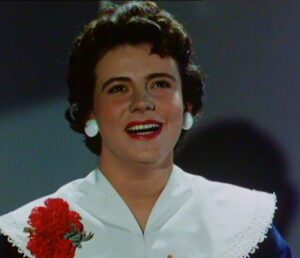 Coertse, born in Durban, matriculated at the Helpmekaar Girls High School in Johannesburg. She began vocal studies in South Africa in 1949. Her first vocal coach in Johannesburg was Aimee Parkerson.

Her debut performance in South Africa was singing Handel’s Messiah at the Johannesburg City Hall on 11 December 1951. In July 1953 she married broadcaster and composer Dawid Engela.

She left South Africa in September 1953 for London and then went via The Hague to Vienna. In January 1954 she started training with Maria Hittorff and Josef Witt.

Her roles were limited in the United Kingdom as the Equity boycott of South Africa due to Apartheid, prevented its members from having anything to do with South Africa’s entertainment industry.

Coertse sang the soprano part in Bach’s Matthäus-Passion at Fritz Wunderlich’s first appearance in Vienna in 1958, when he performed the tenor arias with Julius Patzak singing the Evangelist. In 1958, Coertse and Fritz Wunderlich again worked together at the Aix-en-Provence festival in Die Zauberflöte.

Since returning to South Africa in 1973 she has been a regular guest on South African stages and also a frequent broadcaster on radio and television. She returned to the Vienna State Opera for a single farewell performance as Elisabetta in Don Carlo on 14 December 1978.

In recent years she has devoted her time to exposing young South African singers to the neglected art of Lieder singing which can be artistically even more demanding than opera singing. Her support for her fellow South African musicians has been outstanding – as may be witnessed in her Debut with Mimi and through the Mimi Coertse Bursary.

In 1998, she received an honorary doctorate from the University of Pretoria and another in 2013 from the Unisa. In 2002 she would receive the Golden Rathausmann from the mayor of Vienna.

In 1998, Coertse and Neels Hansen founded The Black Tie Ensemble, a development project which enables young, classically trained singers to bridge the gap between training and professional performance.

This project has developed into the most exciting classical singing ensemble in South Africa, and is now on the brink of becoming a vibrant, new, young opera company. A project for future stars of Africa! The Ensemble, sponsored by Sappi, performs operas at the State Theatre (Pretoria), Walter Sisulu National Botanical Garden (Johannesburg) and the Civic Theatre (Johannesburg).

Coertse was married three times. Coertse’s first marriage was to South African composer Dawid Engela in 1953 but the marriage ended in divorce in 1957. Her second marriage was to Italian business man Diego Brighi in 1965 and was again divorced in 1969.

Her last marriage was to a businessman, Werner Ackerman, in 1970 and lasted until 1994. After five miscarriages, she would adopt a son and daughter, Werner and Mia.