Ayanda Nhlangothi (born 15 June 1982) who is also known as Ayanda, or Aya is a South African singer best known as a contestant on the first season of the M-Net reality competition singing show Idols. 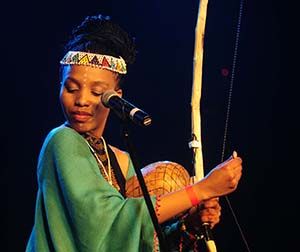 Ayanda’s family has a rich musical history. Her father was a drummer and her mother has been singing with Mango Groove for many years as a backup singer.

Ayanda’s brother is a sound engineer. Tu Nokwe, the legendary South African traditional artist, is Ayanda’s aunt and has been actively involved in her musical training as a vocal coach. Tu also founded the school at which Ayanda is enrolled.