The Free State Stadium, originally known as Vodacom Park and now named as the Toyota Stadium for sponsorship purposes, is a stadium in Bloemfontein, South Africa, that is primarily used for rugby union and occasionally association football.

It was created for the Rugby World Cup in 1995 and served as one of the venues for the 2010 FIFA World Cup. 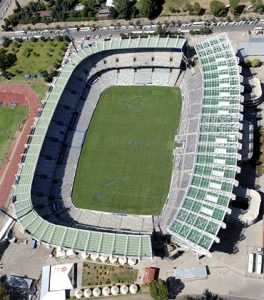 The stadium hosted the 1995 Rugby World Cup as one of the host venues. During the tournament, it hosted first-round matches in Pool C.

The primary rugby union tenants of the facility are:

The primary association football tenant is: