Gys de Villiers (born 4 November 1960) is a South African actor, voice artist and sculptor known for his role as Zieg Combrink in the M-Net soapie Binnelanders, from 2005-2006. 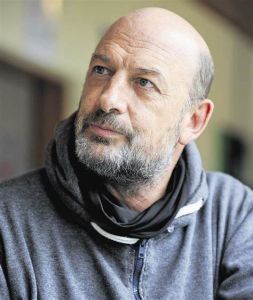 He was born on the 4th of November 1960 in Roodepoort, South Africa. As of 2021, he is 61 years old and celebrates his birthday on November 4th every year.

He joined PACT in 1983, at a period when the company was home to Marius Weyers, Sandra Prinsloo, and Tobie Cronjé.

He solely did theatre work for the first ten years of his career. During this time, he appeared in a number of theatre works, including Die Spinner, Diepe Grond, and Sing Jy Van Bomme, all of which delves deeply into the Afrikaner psyche.

His first major television appearance was as Barry McGregor in Triptiek 1 in 1993.